From 8 December to 7 January Video-mapping, projections, games of light, installations and educational and cultural activities to illuminate Christmas in Florence

After the great success of the past editions, Florence prepares to illuminate itself with
“F-Light”: for a month the Florence Light Festival will bathe the monuments and squares of the city with a new light. The event, spread out in more than 15 locations, proposes video-mapping, projections, games of light, art installations, educational activities and meetings.

The Festival as usual will be inaugurated with the lighting of the great Christmas tree on 8 December in Piazza Duomo: from that moment, which symbolically starts the Christmas festivities, the main events of F-light will come alive. This year the fil-rouge of the event will be the word frontier, understood as horizon and limit, in both the physical and metaphysical sense. Light in fact illuminates new scientific scenarios, but also cultural, social or geopolitical ones, opening new visions and restoring to us all the things of that past that are yet to be discovered and appreciated.

“The new frontier – explains the artistic director, Sergio Risaliti – is not to be understood only as a projection toward what is far away, associated to the future. There are worlds and artistic or cultural experiences from the past as well, to illuminate, and then to be appreciated.”

The video-mapping on Ponte Vecchio, that in the editions in 2015 and 2016 was photographed by tens of thousands of people, will become the canvas on which – with the patronage of the UNHCR – the city of Florence intends to produce a reflection on the theme of migration: beyond the shouted slogans and the simplifications, the aim is to focus attention on the global crisis of refugees, in particular on the major emergencies and the impact they have on the host countries, which are mainly in Africa and in the Middle East. The project is realised by IED, Istituto Europeo di Design.

The Tower of Arnolfo will be illuminated by the 17 global objectives of the UN for sustainable development, that countries throughout the world are committed to pursuing. In this case the frontier is a horizon: the year 2030, year by which the objectives should be achieved. Putting an end to poverty and hunger, stopping global warming, reducing the human pressure on nature, ensuring prosperity and peace: it is with light that Florence will urge everyone to commit themselves toward a brighter future. The initiative is promoted by Terna in collaboration with Global Compact Network Italia.

The Chamber of Commerce will be the natural backdrop for a reflection on the moment’s great economic issues and those of work: a video-mapping on the façade of Piazza Mentana will recount with a cascade of letters and numbers the history of the Chamber of Commerce of Florence, from its historical roots to its future objectives. The projections will be accompanied by a special lighting on the façade of Lungarno Diaz: an event that will last until 9 January, day of the inauguration of the building.

On the façade of the Augustinian Basilica of Santo Spirito “Dimora Luminosa” returns, the dwelling place of light, with the projection of the works of the participants in the open the call launched by IED on the theme of “frontiers”, which was answered by 15 Florentine realities from among schools, kindergartens, associations and centres for the elderly, producing over 200 designs: the youngest artist is 8 months old, the oldest 100 years. The project is curated by IED in collaboration with The Fake Factory.

Among the places involved in F-Light will also be  Palazzo Medici Riccardi, with an installation in the Courtyard of Michelozzo: “Limen” for the ancient Romans is the threshold, the beginning, the principle. Seven lights that cast a beam of light illuminate the mirrors on the floor, creating a game of reflections. Thanks to special sensors, the visitor, passing through the threshold of the light, becomes the protagonist of the installation, interacting with the movement of the light beams. The project is curated by Olo Creative Farm, in collaboration with the Municipality of Florence

Also curated by Olo Creative Farm will be the special lighting which will clothe the Tower of San Niccolò.

Entering “by right” as part of F-Light is also the Museo Novecento, the main site of the exhibition of Adrian Paci, From these lights the night is served: the Albanian artist – always attentive to the themes of transit, migration and of the voyage, for this, his first Florentine one-man exhibition, he has dedicated his own work on the theme of light and water.

Three artists will intervene on the vaults of the Loggia del Mercato Nuovo, the “loggia del Porcellino”: an investigation of multiple voices on the metamorphosis of light, different techniques of “entrapment” that capture the light and orient it, turning it into “form”. A multi-installation with works by Yannis Kraniditios, RaumZeitPiraten and Jose Angelino.

Art will also be the discussion at the Gallery Hotel Art of Vicolo Dell’Oro, a few steps from Ponte Vecchio. In what way? Through Andy Warhol, exponent of Pop Art. An artist who understood and interpreted society by breaking down the boundaries between “high” and “low” culture and transforming the ordinary into the extraordinary.

The Basilica of San Lorenzo will be the canvas on which a fantastic tale will be projected: a silent tale, where past and present co-exist. Protagonists are giant whales and airships, in an idealised and faraway North. And then birds, animals, insects, buildings, landscapes, tracks, a metaphysical flow of giants suspended in the seas and in the skies. Curated by MBVision with Animation Lights Project and ISIA.

Always in the San Lorenzo district, the Central Market will be decked out in a special light installation on the façade, as well as with a “canopy” of lights inside the market. Strong, dramatic and elegant lighting, as always, will also involve La Rinascente in Piazza della Repubblica.

As tradition has it, F-Light will also be the occasion to offer new permanent lighting at one of the monuments of the city: Silfi spa, after having given a new lighting system to the Loggia del Pesce and the Basilica of Santa Croce, this year, during the Festival, will inaugurate the new lights of the Church of Sant’Ambrogio and of the loggio of the Market of Sant’Ambrogio.

This year’s Festival continues the tradition of the route that enhances the Towers and Gates of the city: involved in special illuminations are Porta al Prato and Porta XYZ.

The idea of the frontier can be associated with human limits, with obstacles, with difficulty. Themes that – in addition to the great social issues and cultural reflection involved – touch the heart of every individual. An event not to be missed, to further explore these aspects, will be held in the Salone dei Cinquecento on Monday, December 11 at 11 a.m.: the Mayor of Florence, Dario Nardella, will meet with the athlete Alex Zanardi, testimonial of courage, passion and commitment in overcoming challenges. To the meeting – open to the public – are also invited the classes of the schools of Florence.

The frontiers of light be investigated through art workshops and cultural activities, curated by the Mediation Area of MUS.E, including the event “Giorgio Vasari recounts: the Salone dei Cinquecento seen in a new light”, torch-lit paths in museums and many other thematic activities.

The scientific laboratories, curated by LENS-European Laboratory for Non-linear Spectroscopy – will instead be at home at Poggio Imperiale: ”Science in the Mirror”, a trip in six stops involving experiments and surprises related to light, science and technology.

F-Light is promoted by the Municipality of Florence organised by MUS.E under the artistic direction of Sergio Risaliti, and with the sponsorship of UNHCR.

The event is made possible thanks to the contribution of the Florence Chamber of Commerce and of the sponsors Cartiere Carrara, Carpisa and Terna.

Partner of the project: Silfi

Media partner of the event is LA7. 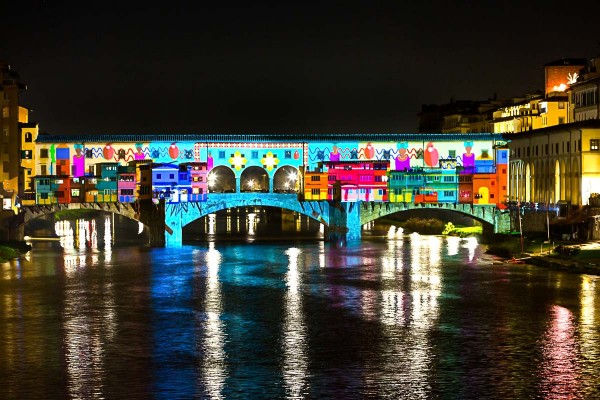 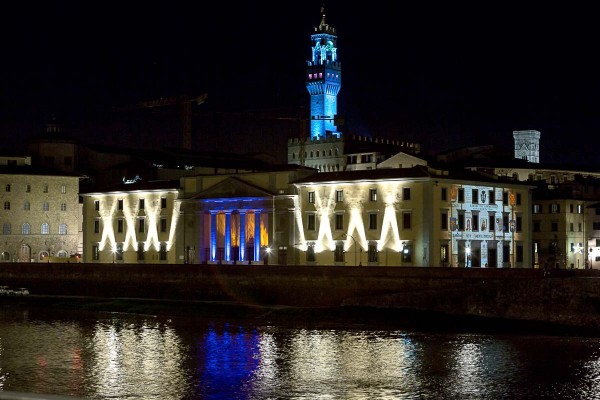 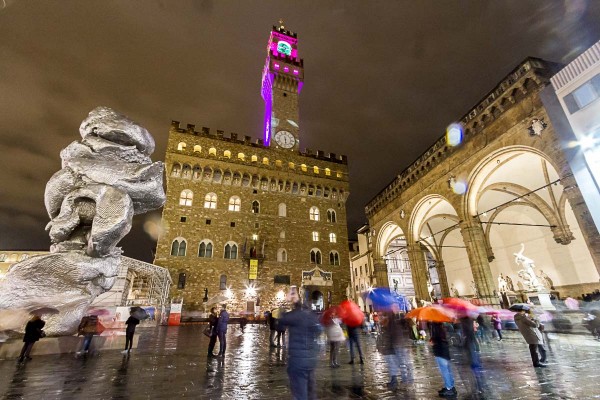 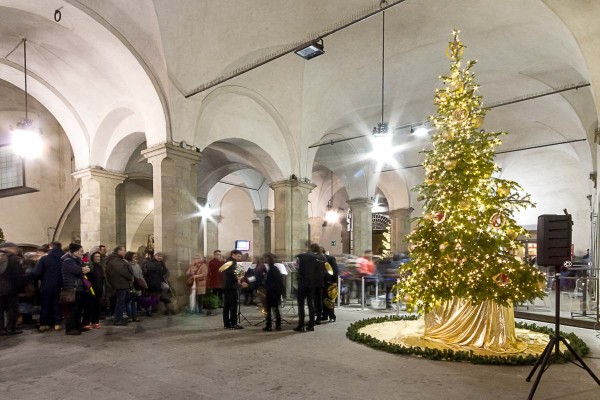 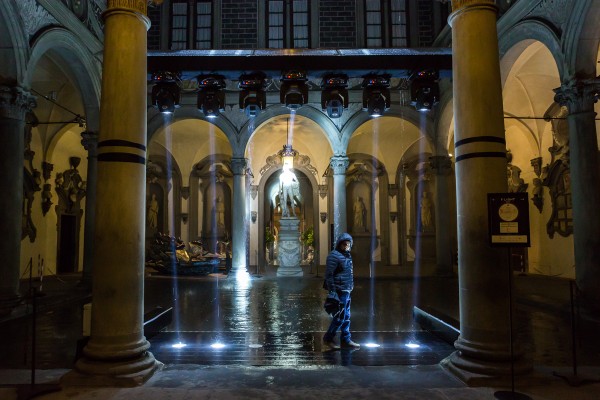 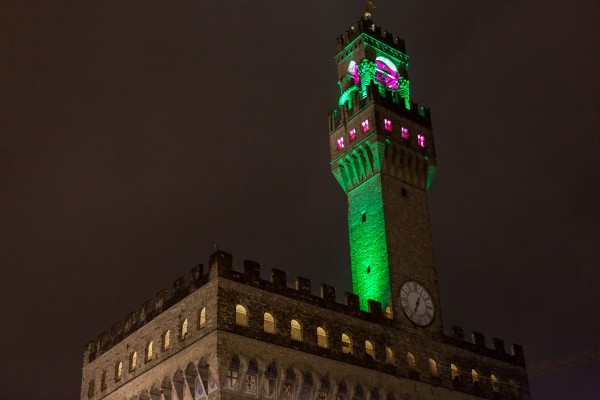 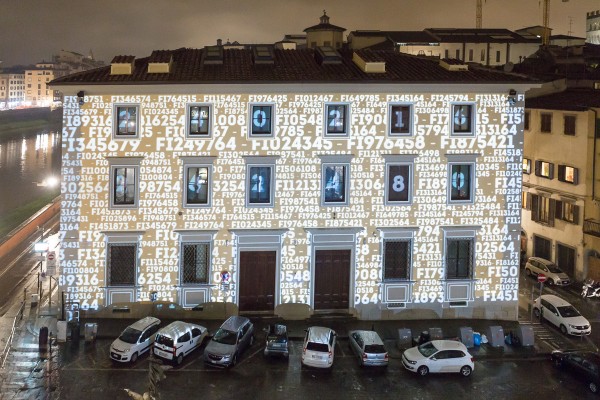 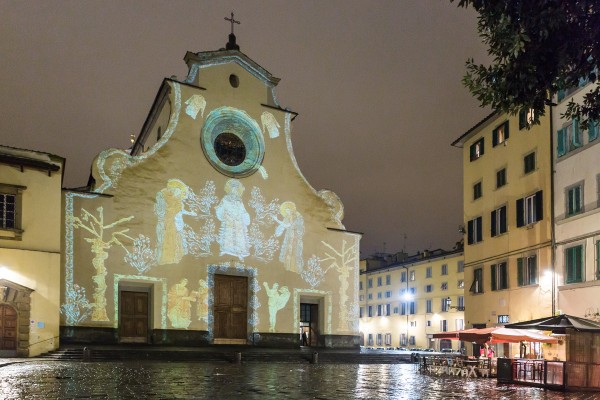