The exhibition season starts again at the Forte Belvedere with a programme entirely dedicated to artists who have distinguished themselves in the field of photography and video, with archive material and new productions. From 18 June to 2 October 2022, Forte Belvedere will host the exhibitions Play It Again, the solo show by Rä di Martino, a project by Museo Novecento, curated by Sergio Risaliti, and FOTOGRAFE! curated by Emanuela Sesti and Walter Guadagnini, presented and promoted by the Fondazione Alinari per la Fotografia and the Fondazione CR Firenze, in collaboration with the Municipality of Florence. This exhibition, spread over two locations, between the Forte Belvedere building and Villa Bardini, has as its absolute protagonists the female photographers of yesterday and today, in a single itinerary rich and evocative, that sees original works from the Alinari Archives alongside contemporary productions.

One of the most appreciated artists on a national and international level, RÄ di Martino is the main protagonist of the summer exhibition at the Forte Belevedere. Play It Again inaugurates a new scientific itinerary at the Forte Belvedere under the curatorial direction of the Museo Novecento, which continues its delocalisation of proposals outside the museum located at Piazza Santa Maria Novella.

This choice is in line with the scientific programme undertaken in recent years by the Museo Novecento, which has always flanked the exhibitions devoted to the great artists of the 20th century with the discovery and valorisation of young artists of our time, encouraging contemporary productions and paying particular attention to the languages of photography and video installation.

Rä di Martino’s works are inhabited by pop culture characters who seem to re-emerge from a corner of our memory that we thought buried. They re-emerge, almost randomly, in the form of caricatures of their former selves poised between the grotesque and the pitiful. Giving life to this sort of archaeology of the memory of mass culture. These characters, almost “heroes” of our childhood, are catapulted into timeless or unhistorical settings or even into totally different contexts, the result of ironic cinematic quotations. Thus, the disturbing, or rather destabilising element comes into play, which after an initial attraction disorients the viewer. The cinematic and Hollywood citations are not limited to the sets or settings but are also translated into the filming or lighting techniques used. Hollywood is a continuous source of inspiration for the artist, for the consumerist vision of large-scale film productions infects the society that enjoys them, recalling the ideas of Andy Warhol’s pop art. Always influenced by the filmic device, Rä di Martino’s art seems to translate into a kind of kitsch more refined elements deduced from the cinematic environment, such as art-house soundtracks, without, however, ever lapsing into outright bad taste, but rather mutating it into something refined and conceptual. Music is another fundamental point of Rä di Martino’s art, which succeeds in disorienting the observer. The alienating effect is one of the distinguishing features of the Italian artist’s work, also achieved through an improper and imperfect use of special effects. It is an art that deceives and enchants that of Rä di Martino, leaving us lost in the meanders of our fragmentary memory, brought close to certain references and then deprived of them.

As Esther Coen writes: “Rä di Martino belongs to a generation following that of the first experiments, of the first comparisons with new technological structures, with computer science or biotechnology. Rä explores the territories of hypothetical galaxies and distant planets, of human shadows cut out and propped up on the lunar crust, of tribes reinvented in a future in which forms and expressions of the terrestrial universe sprout among bewitching and phosphorescent digital colours, moving within aesthetically enchanted landscapes. A reinvention of the future world that recovers fragments of the past, which of the alien seeks the vibrant psyche of the origin, in a modern dialogue with Platonic foundations”.

The exhibition Play It Again takes place on two floors inside the Forte Belvedere building. Four videos will be presented in the large and evocative rooms on the lower floor of the bastion, three of which have been chosen from those made by the artist since 2014, while The Laughing Dice was made in recent months to be presented here. The video presents a fixed shot, in which a series of dice are rolled against a grey background – inside a monochrome, empty 3D designed room. The dice present the face of a man (an Italian actor Lino Musella) on each side. Each is assigned to a different emotion: in one he laughs, in one he cries, in one he frowns. With the first dice, the relationship develops entirely between the face of the dice and the spectator. The actor looking into the camera established a direct contact with the observer, so that he/she feels intimately involved in the emotions reflected in the actor’s face and expressions, a sort of alter ego. As the dice roll, the number of faces in play increases and thus the emotions that intervene also between the dice themselves multiply. A game of destiny is created that involves the narrative within the video and our existence, our biography. As in a glass ball, we recognise our emotions and feelings in a continuous reflexive exchange between the many possibilities made available by the game of life, in which we are active and passive players at the same time. The sound is simple and repetitive, a dull tic toc, marking time slowly, and every now and then a distant whistle joins the throwing of dice and grimaces. Like small amber cameos, the dice imprison faces that lough, cry, despair, get angry, victims of a spell or a deus ex machina, a puppeteer who has already written the script for us.

The second floor of the building is occupied by a single large installation, constructed through an unprecedented combination of a series of works created in the recent past, which here are structured in a new landscape, giving rise to a new narrative. The spectator finds himself immersed in a scenario of total war, between earth and sky, between reality and fiction, where real tanks made of wood pass through the cities of the world or seem to occupy extra-terrestrial space, in a sort of childish and somewhat carnivalesque performance. The artist turns war into a game, looking at world events with irony, transforming a scenario of fear and anguish into a kind of playful and joyful staging. White panels, backdrops and stands, of the kind usually used in photographic and film studios, create a ghostly, metaphysical play of light and reflections, creating an environment in which reality and the virtual world are blurred. On the ground, a series of cannonballs and small spheres seem to lay a constellation at our feet, a universe that seems to be involved in the great game of war, or rather in the conflict presented here as a spiritual and cosmological category. Play It Again, as the title states, is the staging of real and fantastic conflicts, because everything that exists – human beings the gods or the cosmos – exits through conflicts and contrasts, wars and clashes between opposites, a continuous dispute of elements and concepts that appears as the same time balanced, harmonious and even beautiful. For as Heraclitus wrote: “The unlike is joined together, and from differences results the most beautiful harmony”

Many thanks to Snaporazverein – Federica Maria Bianchi. 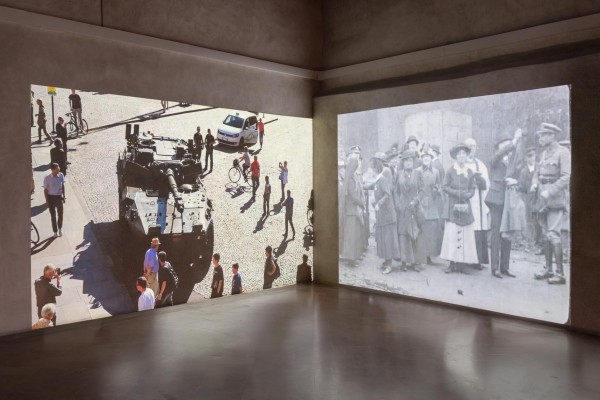 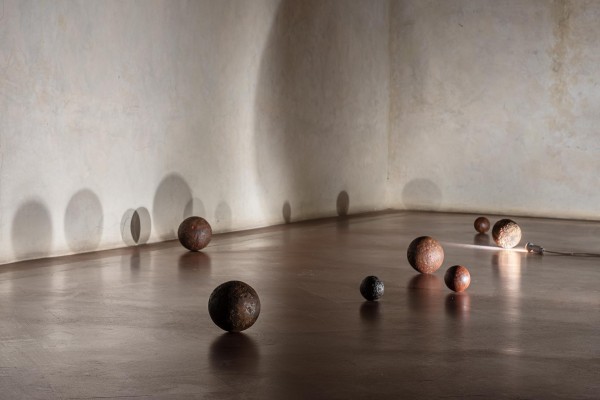 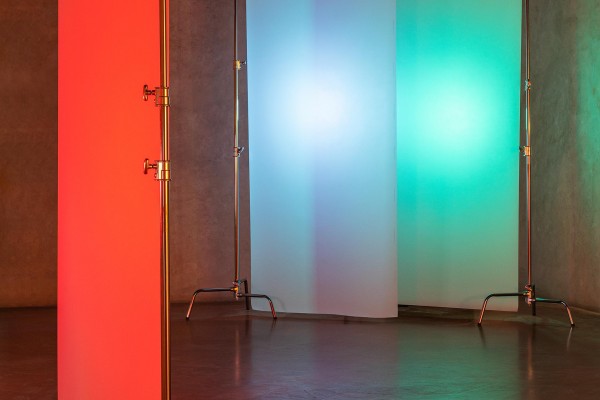 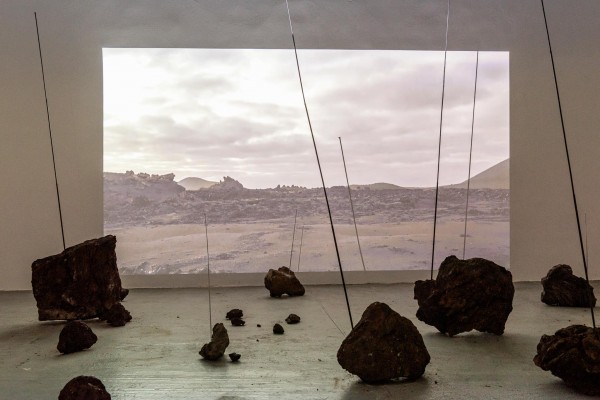 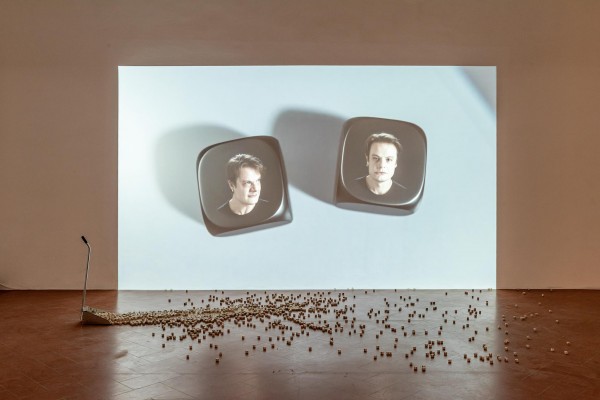 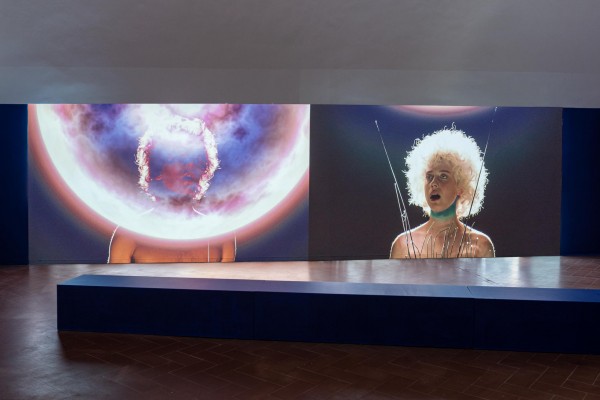 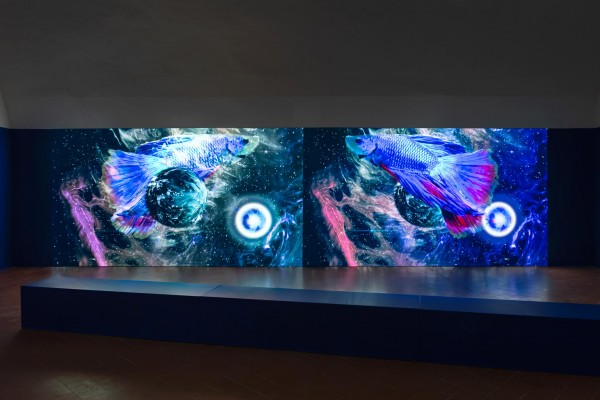 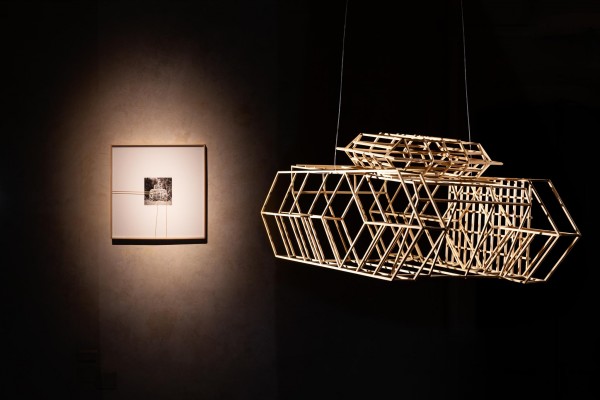 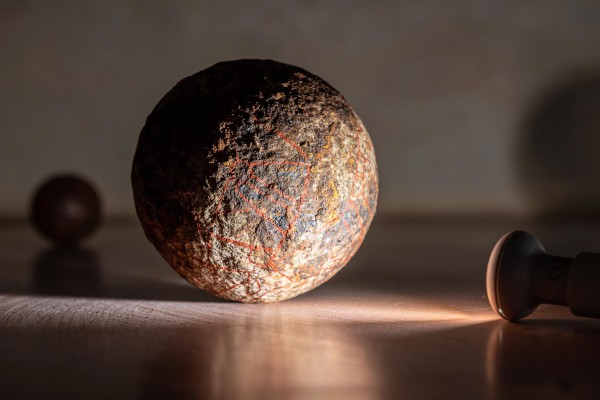 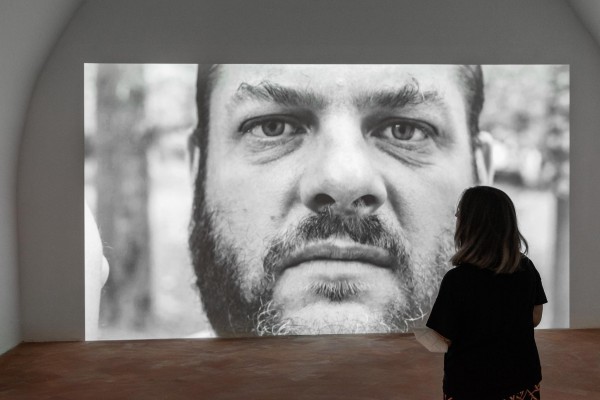 Due to an institutional appointment, Thursday, June 23 Forte Belvedere will be closed to the public.