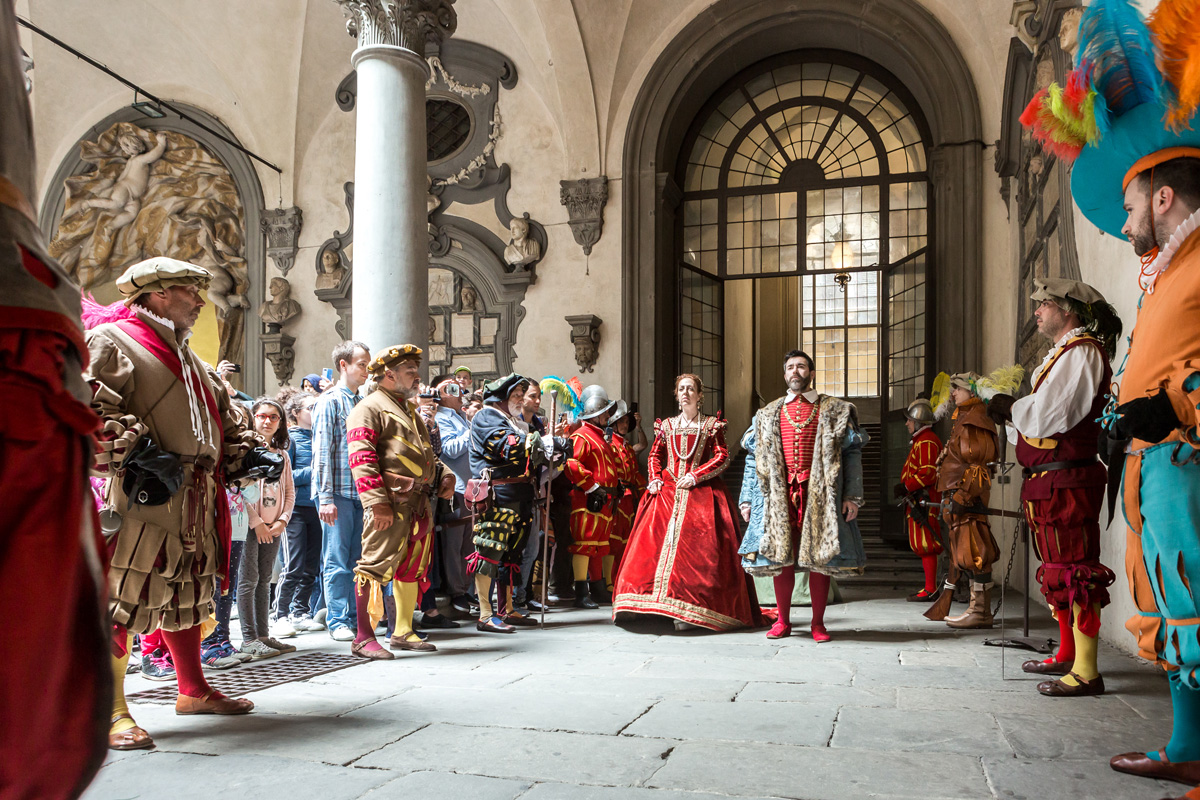 The big celebration:  the wedding of Cosimo I de’ Medici and Eleonora di Toledo is “celebrated” at the Medici Riccardi Palace.

On July 13, the courtyard and garden of the palace become the stage for the spectacle that commemorates Eleonora’s wedding feast, amid dances, music, historical figures, and allegories.

As if by magic, one only has to close his or her eyes to find themselves in the summer of 1539, when Palazzo Medici hosted the grandiose festivities to celebrate the wedding of Cosimo I de’ Medici to Eleonora di Toledo. On the occasion of the 500th anniversary of Eleanor’s birth (1522-2022), the Metropolitan City of Florence and MUS.E, in collaboration with the World Heritage Office of the City of Florence, are staging a grand performance that showcases the highlights of the celebration. Offering spectators, a journey back in time featuring the dances, music, historical and allegorical characters that animated the palace in early July 1539.

The audience attending this engaging production on Wednesday July 13 will be able to relive the charm and atmosphere of the period thanks to the show “La Grande Festa” created by the Compagnia Nazionale Danza Storica. A highly evocative event open to the general public, this spectacle will celebrate those elements taken and inspired by the festivities themselves five centuries later. Among the elegant columns of the Medici courtyard, the attendees will be able to take part in an exceptional experience, thanks to a show of dances and music that draw their inspiration from the 16th century, in the presence of Duke Cosimo I and Duchess Eleonora, interpreted by Alberto Galligani and Florinda Nesticò. In addition to the performances of the dancers dressed in Renaissance costumes, allegorical characters will return in procession: Apollo with blond hair encircled by a laurel wreath “dressed in crimson taffeta” and “a chorus of Muses,” the beautiful Flora “with five nymphs around her” who will sing the auspicious Wedding Song. Again, a short excerpt from Antonio Landi’s play Il Commodo will be offered.

The lavish celebration that commemorated this significant union became the prototype for the grandiose wedding spectacles that were to take place in the following decades. After the marriage by proxy, the very young Eleanor, who had set out from Naples accompanied by her brother Garcia and a large entourage, landed in Livorno on June 22. Her travels continued on toward Pisa to the villa at Poggio a Caiano, where she was joined by her new bridegroom. A few days later the couple arrived in Florence in a ceremonious procession and established themselves in the equally ornate Medici palace. There, between July 6 and 9, graced by a rich parade of allegorical characters including Apollo, the Muses, Flora, and the lands and rivers of Tuscany, Palazzo Medici was the location of the wedding banquet that took place over three days. The wedding celebrations were prepared: “inside the second courtyard, which clad of new and superb ornamentations . . . laughed in the eyes of its spectators […]”

The garden space of the second courtyard had been transformed for the occasion into a grand hall decorated with a constellation of cupids carrying bows and arrows and a series of paintings all around made by the most famous artists of the period depicting the major feats of the Medici personages, from Cosimo the Elder to Cosimo I. Antonio Landi’s comedy Il Commodo was then staged here, with interludes by Giovanni Battista Strozzi set to music by Francesco Corteccia and a striking set design prepared by Bastiano da Sangallo. An enchanting and detailed description exists of the festivities in the Apparato Et Feste Per Le Nozze Dell’illustrissimo Signor Duca Di Firenze E Della Duchessa Sua Consorte, written by academic Francesco Giambullari, as well as what is recorded in Giorgio Vasari’s famous Vite de’ più eccellenti pittori, acultori et architettori.

Included in the ticket purchase of “La Grande Festa” (7€ full price ticket; 4€ reduced; free for under 18s, ICOM, ICOMOS and ICCROM members, disabled and accompanying persons, tour guides and interpreters; 2×1 reduction for Unicoop Firenze members) visitors are welcome to linger in the palace at the end of the show to visit the exhibition Oscar Ghiglia. The years of Novecento, to take advantage of this special and exclusive opening in the exhibition rooms.

Thanks to Business Strategies for support.

Reservations are required. For information and reservations: +39 055/2760552 or info@palazzomediciriccardi.it

Back to news
Last News
List of museums
×
Check your availbility - The big celebration:  the wedding of Cosimo I de’ Medici and Eleonora di Toledo is “celebrated” at the Medici Riccardi Palace.