“The dignity and greatness of the fathers also ennobles the sons, but only if they also distinguish themselves by their own virtue.”

On the occasion of the seven hundredth anniversary of the death of Dante Alighieri (1321-2021), this project highlights the figure of the sublime poet in relation to the history of the City Hall. In the 1380s, Dante, by then reinstated in Florence and already widely celebrated for his work, was selected as one of the examples of virtue to be depicted in a painted cycle: twenty-two illustrious men from history, emblems of high ethical and political values, who could inspire the city’s rulers.

The Florentine series – devised by Coluccio Salutati, notary, intellectual and Chancellor of the Florentine Republic, and now lost – followed the trend of the civic and political painting developed in the 14th century among Italian municipalities, which aimed to convey their political message directly and effectively: one only has to think of the Allegorie e agli effetti del Buon governo e del Cattivo governo [Allegories and Effects of Good and Bad Government], painted by Ambrogio Lorenzetti, in the Palazzo Pubblico of Siena. The idea of the Common Good, understood as the good of a community, to be defended against personal and factional interests, is to be seen in this context. In Florence, the Dominican friar Remigio de’ Girolami had dedicated a treatise to the Common Good in 1304, placing it at the centre of the relationship between individuals and the community, and an allegory of it had been painted by Giotto, according to Giorgio Vasari, in the Palazzo del Podestà, flanked by the cardinal virtues of Fortitude, Prudence, Justice and Temperance. In line with this superior political and ethical concept, its virtues and fundamental principles, but also exemplary figures from history who so well embodied them, occupied a prominent place.

In particular, the cycle painted in the Aula Minor in Florence – which most probably corresponds to this room – was associated with what had been created a few years previously in Padua in the Palazzo of Francesco Da Carrara with the Sala Virorum Illustrium, modelled on the work of Francesco Petrarch: in fact, the characters drew their inspiration from Petrarch’s De Viris Illustribus, but also from the famosi cives, the famous citizens celebrated by Filippo Villani in the same years, thus interweaving ancient history and Florentine glory.

The Roman heroes, first and foremost Brutus, the ultimate defender of liberty and Salutati’s favourite example of virtue, embodied the great civic virtues of Magnanimity, Justice and Prudence, in contrast to Pyrrhus and Hannibal, who were destined to succumb to mighty Rome. The six monarchs, from the Assyrian Ninus to Charlemagne, symbolised the idea of universal government as an antithesis to tyranny; while the five Tuscan literati, peculiar only to this cycle, showed how Florence was a worthy successor to Rome on account of the extremely high value of its poetry. Here, alongside the arms and the toga once defined by Cicero, in Salutati’s programme literature became a distinctive expression and extraordinary excellence of Florentine history: poetry represented the city’s intrinsic virtue and placed it in direct continuity with Rome’s golden past. In this respect, Claudian’s presence in the cycle was emblematic, as he was the last great Latin poet, at the time reputed to be of Florentine origin, a symbolic link between the ancient age and Florentine rebirth.

The civic, ethical and political message was made even more explicit by the inscriptions attached to the effigies, in a perfect interplay of poetry and painting: indeed, each character was accompanied by a titulus, which described the distinctive characteristics for which the individual figure had been chosen to feature in the cycle. “The pictorial cycles of Famous Men do not conceal their message […] amid the tortuosity of erudite allusion or allegory: they embody it, transparently, in galleries of well-known figures, which in any case are identified, almost invariably, by means of tituli, verbally expressing the sense of the figurative homage.”  (Maria Monica Donato)

In addition, the inscriptions – in Latin – were written in the first, second or third person, thereby constituting an ideal gathering of people, a perfect assembly of great men of action and intellect: “those who could look at the personages and read their epigrams on the wall could have the impression of a varied and unpredictable intertwining and alternating of words spoken and heard”. (Giuliano Tanturli)

We have direct evidence of the inscriptions present thanks to the Laurentian manuscript Conv. Sopp. 79, displayed here and opened specifically on the pages dedicated to the Illustrious Men. We can in fact read the Epigrammata virorum illustrium posita in Aula Minori Palatii fiorentini, ut sunt per ordinem.

In particular, Dante Alighieri is remembered thus: “Dantes Alligherius. Stirpis alagherie sublimi gloria dantes / Hic te permixtum ducibus florentia tantis / Exhibet, autorem, quo noscat quilibet illum /Qui cecinit lapsos, surgentes atque beatos”, that is, “Dante Alighieri. Dante, sublime glory of the Alighieri family, Florence depicts you here, together with such great warriors, so that all may know the author who sang of fallen souls [for eternity], of those destined to ascend [to heaven] and of those blessed”.

We know that, as the culminating element of the cycle, in 1416, no less than Donatello’s marble David was transferred to the room, accompanied by an inscription of a strongly civic and inspirational nature: “Pro patria fortiter dimicantibus etiam ad versus terribilissimos hostes Dii praestant auxilium”.

In the mid-fifteenth century, the Illustrious Men continued to inspire the Florentine Seigneury, to the extent that in 1451 Filippo Lippi – one of the most outstanding artists of the time – was asked to restore and repaint some figures, among which Dante Alighieri was expressly mentioned: “Dante Aringhierum et alios famosos viros in Salecta Palatii Dominorum”. Ten years later, in 1461, the portrait of the deceased Chancellor Poggio Bracciolini was added to the series, as had presumably already been the case with Coluccio Salutati.

From 1469, it was decided to carry out major work on the room and the adjacent one, followed three years later by the resolution to renovate the whole interior with a new decorative programme.

The structural work was completed in the summer of 1475, and in the following year Benedetto and Giuliano da Maiano, together with Francesco di Giovanni (known as il Francione), began work on the connecting door between the two rooms (now the Sala delle Udienze and the Sala dei Gigli). The marble-relief decoration features a striking interplay of religious and secular, classical and Florentine references, while the wooden door shutters have inlays of two of the Illustrious Men from the previous cycle: Dante and Petrarch.

In the spring of 1476, the Seigneury purchased from Lorenzo and Giuliano de’ Medici another sculpture of David – this time in bronze – by Verrocchio, which was positioned at the top of the stairs, at the entrance to the room.

In October 1482, the Works Council commissioned Domenico Ghirlandaio, Sandro Botticelli, Perugino, Bigio Tucci and Piero Pollaiolo to paint the walls of the room. Only the wall assigned to Ghirlandaio was completed: in the centre stands St. Zanobi, flanked by the coats of arms of Florence, the cross and the red lily, emblems of the People and the Municipality of Florence. On the sides, in an illusionistic setting that recalls a triumphal arch, there appear six Roman heroes, updated echoes of ancient examples of virtue: the triad on the left presents Brutus, Mucius Scaevola and Furius Camillus; on the right Decius Mus, Scipio Africanus and Cicero.

The Illustrious Men gathered here at the end of the fourteenth century have taken on an updated form and a new arrangement and can still be seen today as visual memories of an ideal past, but also, and above all, as inspirational aspects, constantly reinterpreted, of our individual and common actions. 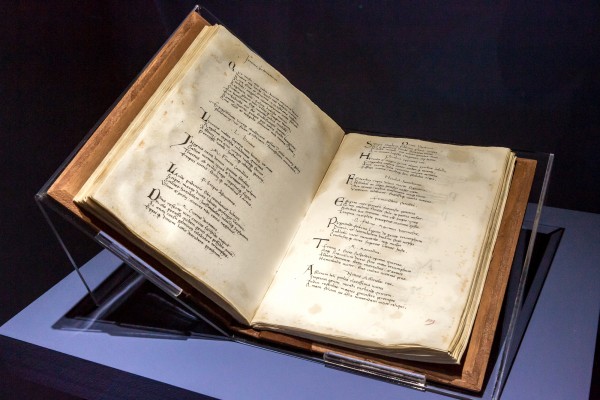 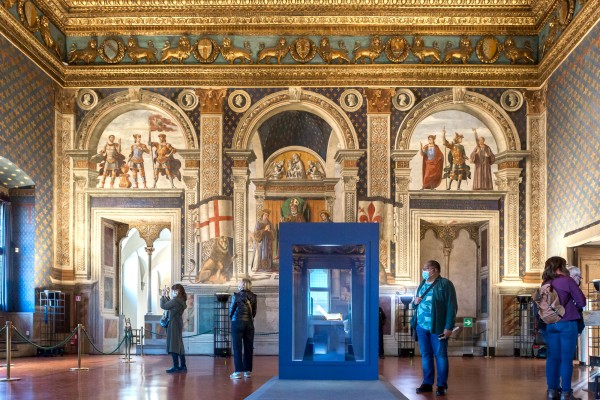 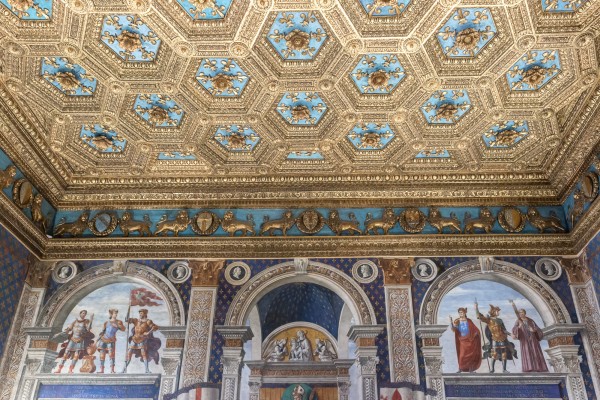 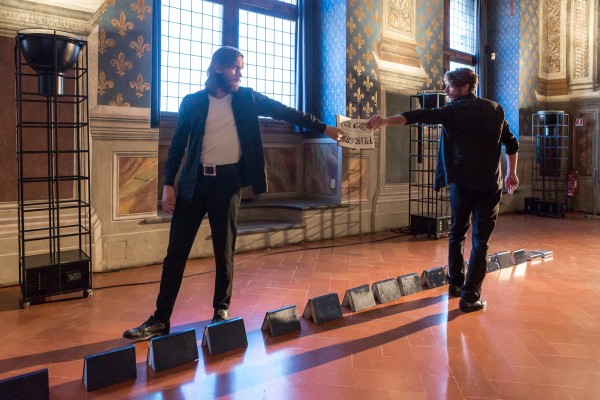 Promoted by Comune di Firenze, as part of the celebrations for the centenary of the death of Dante Alighieri and in homage to the memory and studies of Maria Monica Donato and Giuliano Tanturli