Following the celebrated monographic retrospective exhibitions of Giuseppe Penone, Antony Gormley and Jan Fabre, and of the collective Ytalia, this year the battlements and the villa of Forte di Belvedere in Florence will host Gong, an imposing retrospective exhibition dedicated to Eliseo Mattiacci (Cagli, 1940), one of contemporary art’s major protagonists, included among the pioneers of Italian avant-garde of the late Sixties, craftsman of experimentation and renewal in sculpture, inspired inventor of cosmological iconographies and of new spatial and conceptual relationships between art and nature, between man and the environment.

A monumental presentation of twenty sculptures exhibited outside the fort and within the villa, in addition to an extensive collection of drawings, about eighty, which, for the first time ever, allow the public to admire the always supreme graphic activity of Mattiacci. It is an almost shamanic exercise, aimed at exploring the sublime of the cosmos, the orbits of the planets and stars, the rhythms and geometries that belong to the infinite universe, so as to draw stellar maps that today, just like millions of years ago, also function in symbolic, ritualistic terms. From his earliest works, iron sculptures that are actual assemblies of a new, as yet unseen archaism, Mattiacci has understood how to blend and reunite gestures that are human and those of the metaphysical imagination with the unfathomable nature of life in the universe and with the immeasurable energy of matter and among the stars, with the cosmic cycle of life and death, that of being and nothingness, the forces that are visible and those not still invisible in space and time, such as magnetic attraction and gravity.

“I feel attracted by the sky with its stars and planets and all that lies beyond, by our galaxies, it’s an imagination that goes beyond, as if it seeks challenging imagination itself, as if in a dream. I would like to launch one of my sculptures into orbit in outer space. It would truly be a magnificent dream to know that one of my spatial shapes is orbiting out there,” stated Mattiacci, to whom personal exhibitions have been held in various museums and foundations around the world, including the National Gallery of Modern Art in Rome, the Kunstforum Stadtische Galerie in Munich, the Capodimonte Museum in Naples, the Institut Culturel Italien in Paris, the Fondazione Prada in Milan, the Museion in Bolzano, the Fattoria di Celle – Gori Collection in Pistoia, the Italian Cultural Institute in Los Angeles and Toronto and the MART – Museum of Modern and Contemporary Art of Trento and Rovereto.

“We once again return to the Forte di Belvedere – said the Mayor Dario Nardella – with a major exhibition dedicated to a contemporary artist. The Medicean Fortress is once again opened to the public with an exhibition that traces the entire artistic activity of Eliseo Mattiacci and offers us a marvellous glimpse into his cosmogony. Florence confirms itself as a vital and dynamic city and not only as the cradle of the Renaissance, claiming with humility and tenacity its role as a protagonist in contemporary art and in public art in particular.”

Sergio Risaliti, exhibition curator and artistic director of the Museum of the Twentieth Century, writes: “With this exhibition of Eliseo Mattiacci at Forte di Belvedere, all of Florence reinforces its image as a contemporary city that, together with the artists, reflects on its civil history and on its artistic heritage, on the major cultural legacies of the past and modern society, on the themes of science and spirituality, especially on poiesis and techne. And it does this by offering for the admiration of the public and tourists the works of one of the great masters of our time, creator of sculptural shapes and graphic paths that have force enough to combine the dimension of materialism with that of the metaphysical dream, the ctonio world and that of infinite space. A trajectory, that of Mattiacci, of consistency and exemplary freedom, of generous resistance and lyrical power, an indispensable presence in the history of art, starting from the first works that permitted him to wed, as an artist and a poet, the work of the earth and technology with the reactivation of myths and the contemplation of the stars (Scultura lunatica / Lunatic sculpture, 1962). Until arriving at his most recent works and installations, with which the artist from the Marches region has sought to present his idea of the cosmos to the world, continuing on a journey of discovery and wonder within nature and the universe that unites Lucretius and Galileo Galilei, Giacomo Leopardi and Mattiacci himself, poets and artists of yesterday and today.”

Located within the interior spaces of the Fortress, important historical works such as the Tubo (Tube) (1967)  can be found. This work, measuring approximately sixty metres of extension, will be presented along with – for the first time since the exhibition at the Galleria L’Attico in Rome –  the Installation Recupero di un mito (Recovery of a Myth) (1975), as will also be found the sound installation Echi di suoni e cani che abbaiano (Echoes of sounds and dogs barking) (1983). Also exhibited will be the early works such as Scultura lunatica (Lunatic sculpture) of 1962. Regarding the most recent works, an entire room will host the installation with the planets in aluminium on the layered surface in lead pellets La mia idea del cosmo (My idea of the cosmos) (2001), while the large propellers in aluminium of Dinamica Verticale (Vertical Dynamic) (2013) will dominate the spaces on the ground floor. Continuing on the first floor, the public will intercept a sequence of rooms dedicated entirely to drawing, a true “exhibition within the exhibition” that will systematically examine the dense seasons of this constant and yet so little probed practice of the work of Mattiacci. Drawings will be exhibited that evoke the atmosphere of the performance of the Seventies, the cycle Predisporsi ad un capolavoro cosmico-astronomico (Preparing yourself for a cosmic-astronomical masterpiece) of 1980-1981, the frottages on metal of the Campi magnetici (Magnetic fields), the Cosmogonies, up to the recent Corpi Celesti (Celestial Bodies) of 2005-2015.

Upon leaving the villa, in the large terraced gardens of Forte di Belvedere, one finds the large works of corten steel of cosmic astronomical inspiration, with one side oriented toward the great Renaissance construction site which is the city of Florence, and the other side directed toward the hills that host the Arcetri Astrophysical Observatory, not far from the final residence of Galileo Galilei. Making  use of the generous loans from public and private collections, in this system of spatial references the works will be arranged starting from the end of the Eighties up until the most recent years, such as the two totems Verso il cielo (Toward the sky) (1987), Equilibri precari (Precarious equilibria) quasi impossibile (almost impossible) (1991), Segno australe – Croce del Sud (Southern Sign – Southern Cross) (1991), Gong (1993), Vie de cielo (Sky roads) (1995), the disks of Ordine cosmico (Cosmic order) (1995-96), Totem con nuvola (Totem with cloud) (1996), and the as yet unseen Scultura che guarda (Sculpture that watches) (1997-2013).

On the occasion of the exhibition, the Museum of the Twentieth Century will present a preview of the sculpture Per Cornelia (For Cornelia) (1985) and the large drawing Occhio del cielo (Eye of the sky) (2005), starting from next 25 May, in conjunction with the reopening of the permanent collection of the Alberto della Ragione collection, to enshrine a scientific and design correlation between the spaces of the Fortress of San Giorgio and those within the former Leopoldine, in piazza Santa Maria Novella. 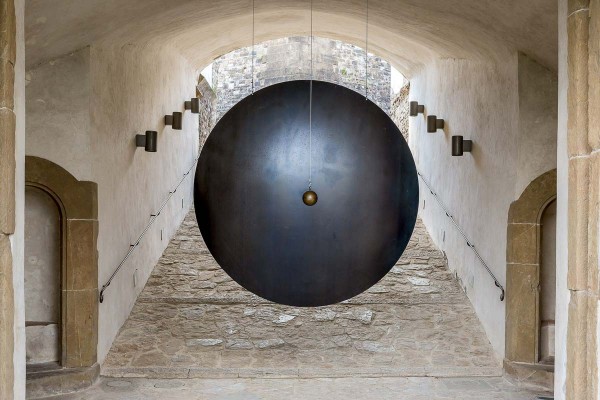 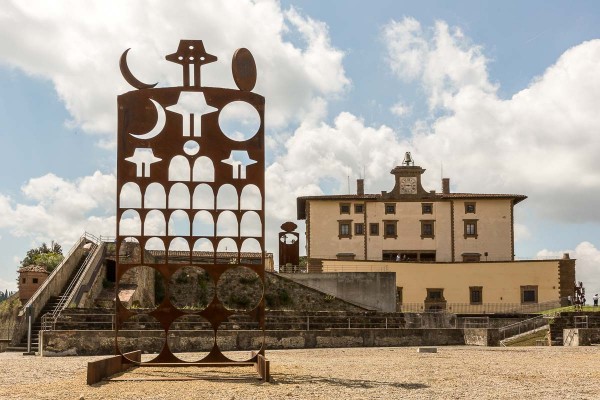 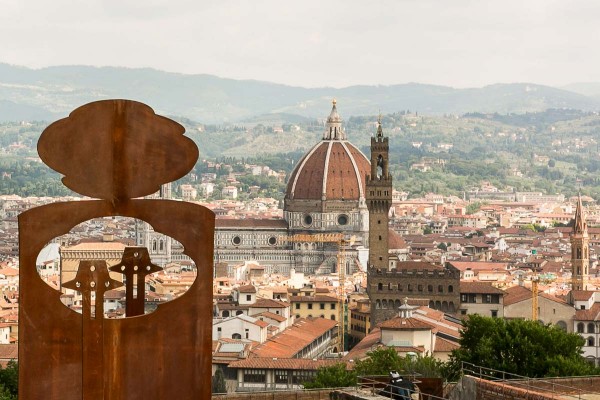 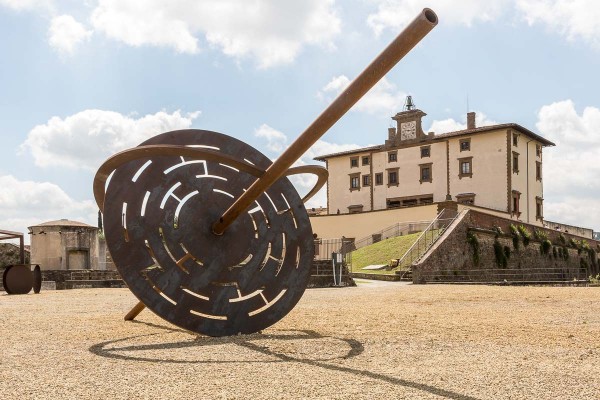 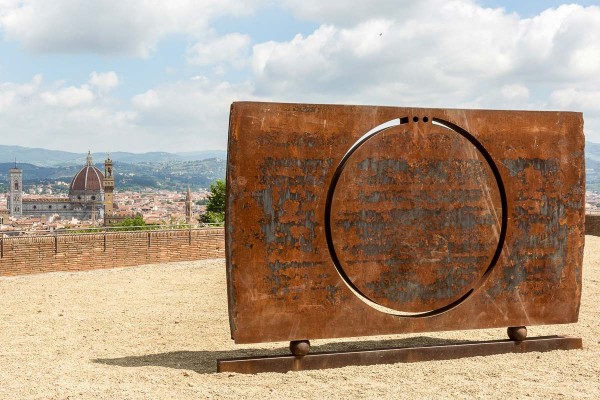 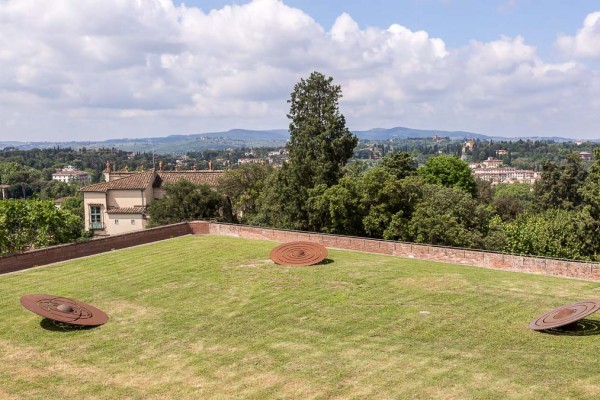 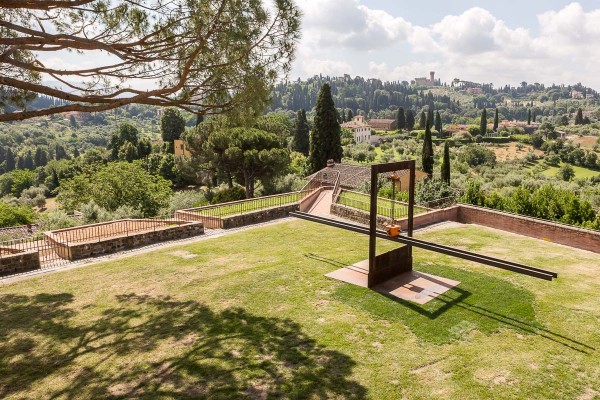 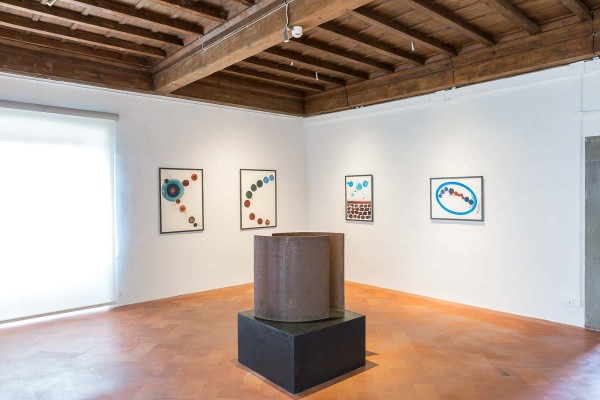 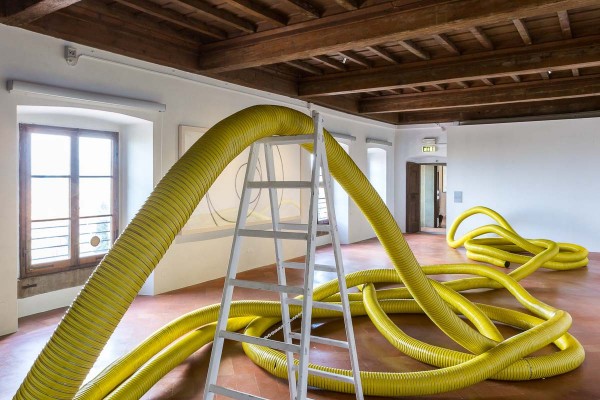 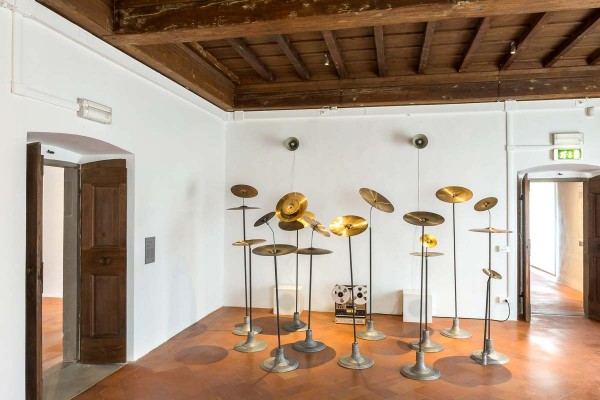 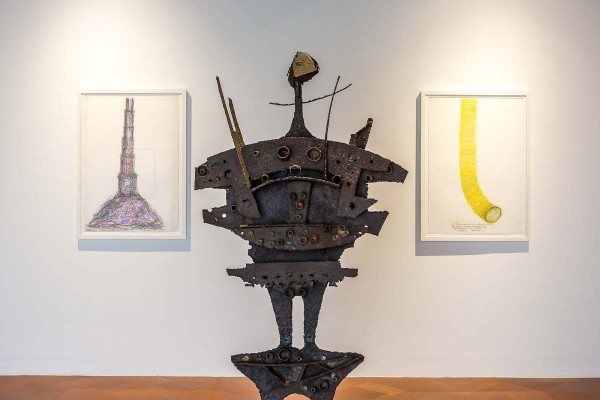 Curated by Sergio Risaliti in collaboration with Studio Eliseo Mattiacci

Promoted by the Municipality of Florence